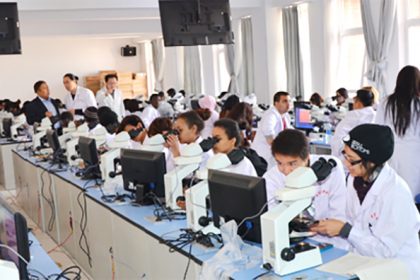 In 2016, the country continues to release policy positive, driven by domestic medical device manufacturers complete import substitution is then entered a crucial year, multinational medical device giant remains the greatest opponent: they still hold a high-end medical equipment market “initiative”, high-end market coverage of 85% on one side and “localization” layout of unboiled water.

Just look at the price, it will recognize that time has passed, the local medical device manufacturers “import substitution” campaign broken?

This in circle is article medium of news: said big, is because as industry event, CMEF has held has 76 session, in previous years often in exhibition Shang on directly broke procurement big single, GPS collective absent can be described as incredible; said is unlikely to, is because from last year began, including GPS zainei of devices manufacturers on gradually released news, future will no longer participate in autumn exhibition, “collective absent” also can said is in expected within.

On the face of it, including the shadow, MINDRAY, homemade, Neusoft medical equipment manufacturers to replace GPS became the main force of this exhibition, which is a bit like a microcosm of China’s 300 billion medical device market, made in China is emerging, import substitution wave really hit. Despite the ferocious momentum of multinationals “localization” strategy, this alternative is not easy.

“To use efficient methods to catch up with the import manufacturers. If you want to compete with GPS positive, is very difficult, so you need to use some method of differentiation, in specific markets to pursue. “MINDRAY medical Chairman chengming and revealed the first financial daily in an interview.

What you can read next

Future Development Of The Orthopaedic Market

Leave your email and receive updates...